The following is an English transaltion of excerpts from a former Korean comfort woman Mun Oku-chu's memoir: goo.gl/uOH0Ze

(In Mandalay, Burma)
Page 63
The soldiers and we had the same thoughts, that is, we must work hard for our emperor. The soldiers gave up their wives, children and their own lives. Knowing how they felt, I did my best to solace them by having conversation with them.

Page 68
I prayed for safety of Ichiro Yamada. After two or three of months, the troop unit to which Yamada belonged returned from the front. Yamada returned in good health. He immediately came to the comfort station. He said "I, private first class soldier Yamada, have just come back from the front." Yamada gave a salute to me. We hugged in full of joy. Such a day was so special that the comfort station owner Matsumoto (a Korean from Daegu) closed business for the day. The comfort station was full of excitement, and we, comfort women, contributed 1 yen per woman to hold a big party for them.

Page 75
I saved a considerable amount of money from tips. So I asked a clerical staff whether or not I could have a saving account and put the money in the account. His reply was positive. I knew that all the soldiers put their earnings in the saving accounts in the field post office, so I decided to put my money in the saving account. I asked a soldier to make a personal seal and put 500 yen in the account. I got my savings passbook and found 500 yen written on the passbook. I became the owner of the savings passbook for the first time in my life. I worked in Daegu as a nanny and a street seller from the childhood but I remained poor no matter how hard I worked. I could not believe that I could have so much money in my saving account. A house in Daegu cost 1,000 yen at the time. I could let my mother have an easy life. I felt very happy and proud. The savings passbook became my treasure.

Page 98
Ichiro Yamada came to see me once a week and I was in a great mood on that day from the morning. But if he did not show up on his once a week holiday, I became so worried wondering if he was killed by the enemy that I could not work properly. He made me worry so much.

(In Rangoon, Burma)
Page 106~107
I was able to have more freedom in Rangoon than before. Of course, not completely free but I could go out once a week or twice a month with permission from the Korean owner. It was fun to go shopping by rickshaw. I can't forget the experience of shopping in a market in Rangoon. There were lots of jewelry shops because many jewels were produced in Burma, and ruby and jade were not expensive. One of my friends collected many jewels. I thought I should have a jewel myself, so I went and bought a diamond.

Page 107
I often went to see Japanese movies and Kabuki plays in which players came from the mainland Japan. I enjoyed watching players change costumes many times and male players portray women’s roles. I became a popular woman in Rangoon. There were a lot more officers in Rangoon than near the frontlines, so I was invited to many parties. I sang songs at parties and received lots of tips.

(In Saigon, Vietnam)
Page 115~118
It was finally time to return home. I went to Saigon via Thailand. The ship was to depart from Saigon. Then Tsubame said "I had a nightmare in the morning about my mother vomiting blood. I am afraid that something unlucky will happen, so I will not return to Korea." Hiroko, Kifa and Hifumi agreed with Tsubame saying "We will not go back to Korea, either."

Page 120
When I went to a cabaret where Japanese military men hung out, navy pilots were there. Some of them asked me "Why are you still here?" I replied "I am still here because I don’t want to go home. I want to go back to Rangoon."

Page 121
I put on a pair of high heels, a green coat and carried an alligator leather handbag. I swaggered about in a fashionable dress. No one could guess that I was a comfort woman. I felt so happy and proud.

(Back In Rangoon)
Page 123
A military man came on a bicycle and asked me "Hi Yoshiko, can you ride a bicycle?" I replied "No, I can’t." He asked "Would you like to learn how to ride?" I learned with pleasure. I rode it smoothly through the town of Rangoon. I didn't see any other women on bicycles. People on the street looked back at me. It was fun for me to go to the town of Rangoon. I talked with people in Burmese, Japanese and Korean. I had no difficulty communicating when I shopped.

Page 126
I killed a non-commissioned officer who was drunk and held the sword against me. I won acquittal as legitimate self-defense, and many military men were pleased with that court decision. 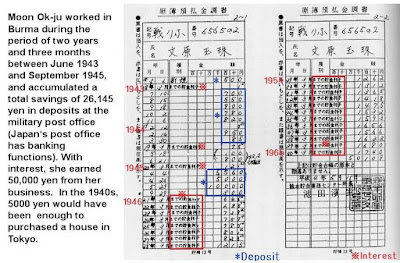 Posted by Korea Institute of History at 4:16 AM